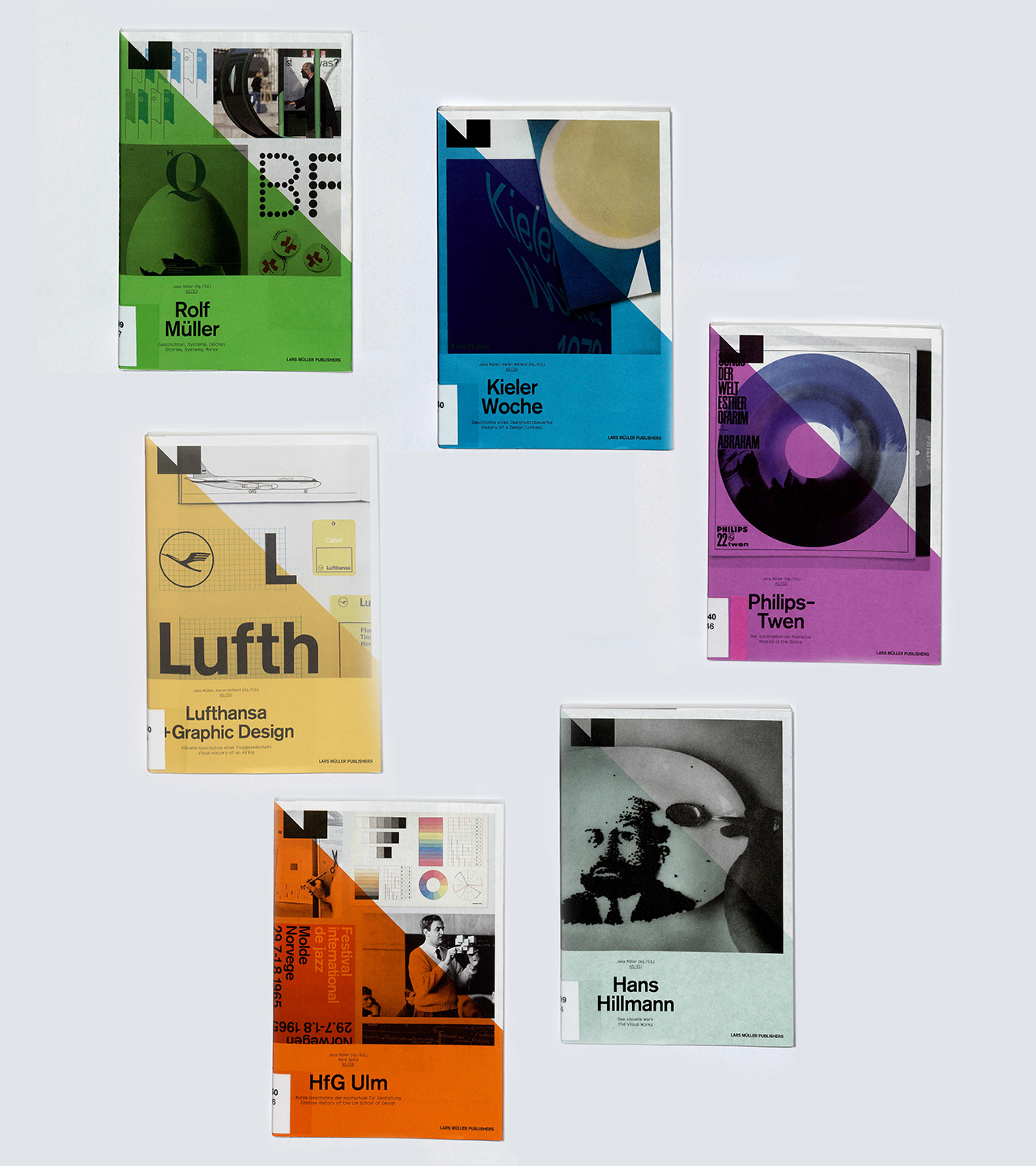 The A5 series is intended as a growing archive on the history of graphic design. Each volume introduces outstanding personalities and important themes from the history of international graphic design, with numerous illustrations, essays, and interviews. A5 is a cooperative project between Optik Studios, the labor visuell [visual lab] in the design department at the Fachhochschule Düsseldorf and Lars Müller Publishers.

Rolf Müller (born in 1940) studied at the famous Ulm School of Design, taught by Otl Aicher, Josef Müller-Brockmann and others. Shortly after graduating, he became one of the leading personalities under Aicher in the design of the visual identity for the Munich Olympic Games in 1972 – work which set new standards in international design. In parallel, he established his design firm Büro Rolf Müller. For nearly four decades, the firm developed corporate identities, books, magazines and signage systems on the highest level. The firm’s projects included the visual identity of the City of Leverkusen, forged over several decades, and the magazine HQ High Quality for Heidelberger Druckmaschinen, of which 39 issues were published.

The Ulm School of Design (HfG Ulm) ranks among the world’s most important institutions of the 20th century in modernist design. What design means today cannot be understood without considering the developments at HfG. That applies not only to the design of appliances and messages in a great variety of forms, but also to the profession of designer, design education at universities, methodology and design theory – starting with the relationship between design and science and ranging up to the question of what relationship design should adopt with art and with crafts, with business and with society. This massive impact of HfG is all the more astounding when one considers that it existed for only 15 years, from 1953 to 1968.

Lufthansa is a leading global airline that can look back on a long and varied history stretching back to the 1920s. The history and development of the company’s visual aesthetic is equally interesting. In the early 1960s, the company took a decisive step in corporate communication by commissioning designer Otl Aicher and his group of HfG Ulm students to compile an integrative study, with a view to redesigning Lufthansa’s visual aesthetic. An extensive but incomplete implementation of their plan began in 1963. Today it is considered to be one of the most pioneering corporate design solutions of the twentieth century.

The first poster competition for the Kieler Woche regatta was held in 1950, and over the years this annual event has come to be Europe’s most prestigious design competition. Since 1959, five designers or design practices have been invited to take part. While the poster competition became a corporate design competition in the 1970s, the Kieler Woche theme remained unchanged, so the designs submitted over the past sixty years offer a unique survey of how European graphic design has developed. The list of winners and participants reads like a Who’s Who of graphic design. They include: Anton Stankowski, Ruedi Baur, Wim Crouwel, Cyan, Alan Fletcher, Josef Müller-Brockmann and Odermatt + Tissi.

Between 1961 and 1968, the magazine Twen produced a series of LP recordings in collaboration with the Philips record label. During this period, all editions of Twen were accompanied by LPs drawn from the realms of jazz, classical music, radio plays, world music, or pop. For the designs of his record covers, art director Willy Fleckhaus used Concrete Art by Karl Gerstner, Max Bill, and other dedicated graphic designers such as Heinz Edelmann and Günther Kieser. This now forgotten series, comprising around 70 disks, is a masterful instance of the conjunction of music and graphic design. In collaboration with music archives and private collections, this rare series is reunited in its entirety and documented in this publication.

Hans Hillmann, (b. 1925), studied under Hans Leistikow at the Werkakademie in Kassel. He started to design film posters while he was still a student, and by 1974 he had produced over 150 of them for the Neue Filmkunst distribution company, attracting international commendations, including the Grand-Prix-Toulouse-Lautrec. He was appointed to a chair in Kassel in 1961, and made a major contribution to shaping the character of the Kassel poster school. He worked for the cult magazine «twen» as an illustrator, then later for the Frankfurter Allgemeine Magazin. He illustrated numerous books, including his version of the Dashiel Hammett thriller Fly Paper (1982).